The Road to San Francisco

Over Christmas and the new Year there was a trend – and one I don’t remember seeing in previous years – for people to post their reflections on 2014 as it drew to a close. I didn’t have time to really think about 2014 at the time, but I’ve been reflecting on it ever since.

2014 was in many ways one of the most important years of my life. I completed my second term as President of Bangor Students’ Union, leaving with some final fond memories and the knowledge that I tried my darndest to make Bangor a better place. I got my first proper adult job, with my first proper adult pension plan. I managed to go the whole year without buyinga single book – the first of what I hope will be a long succession of New Years Resolutions that change my life habits. I spent two wonderful weeks at the Edinburgh Fringe Festival with some of my favourite people, revelling in the heady atmosphere.

But in reality, 2014 will be significant to me for two major reasons. The first is that after 8 years of togetherness (including 2 years of long distance and 3 years at university) I moved in with my wonderful girlfriend. Lizzie has always been a rock in my life, and living together in the beautiful little town of Ilkley is more than I could ever have wished for. 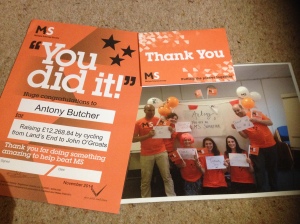 The second reason is, of course, completing Lands End to John o’Groats for the second time. I’m in the process of writing up the ride and so will pass over the details for now – but I guess the fact that I have now raised over £12,000 for charity is something that still hasn’t quite sunk in. A few weeks ago I recieved a letter, certificate and more from the MS society thanking me for my fundraising – something I definitely wasn’t expecting and something that really helped me realise just what had happened last year.

This in its own right is fairly awesome. I’m happy with this. There is already a broad smile emblazoned across my face. But things got better. Just after the new year arrived I recieved the following e-mail: 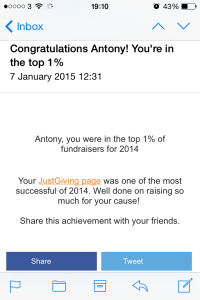 I’m not sure I can add any words to this.